Mukta-jiva sings of herself as "I am food of Bhagavan Shree Narayana"... 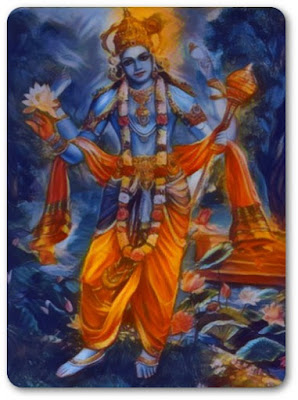 BRILLIANT ARTICLE BY L. SRINIVASAN. HAD BEEN FOUND IN #"SAPTAGIRI"#, MAY 1996.

Tirumalisai Alvar calls God the cultivator of Bhakti. Unlike ploughing a waste land for the first time to bring it under cultivation, God’s ﬁeld has been under agricultural operations for long and even without His having to sow fresh seeds, the old seeds of unexpected good actions counted as meritorious actions of God.

One small boy says to another, “Come here, i will tell you a secret". The other goes to him eagerly, and the ﬁrst boy tells him “There is rice inside paddy". Evidently disappointed, the other boy exclaims, “Oh, what kind of a secret is this ?“

The first boy congratulates himself on his cleverness in having deceived his colleague. This is a kind of game among youngsters.

Let us suppose that