Can the English translation of Gaudiya-Poetry be Rasika? Discussing "Chitra Kavitvani" by Shree Shreemad Rupa Goswami 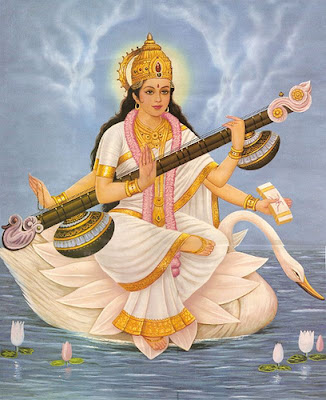 "Chitra Kavitvani" is a very rare brochure. I have compiled the article devoted to "Chitra-Kavitvani" and some semantic problems, which are inevitably encountered by those English readers, who don't know Sanskrit.

Previously I have written that Sanskrit Poetry is very complicated and par excellence is immutably interwined with such concept as Alankara (Embellishment).

"Kavitvani" (कवित्वन - kavitvana) can be translated either as "Wisdom" or as "Poetic Gift" or "Poetic Genius" or "Poetic Artistry".

Actually, any person claiming to be a bhakti-yog in Gaudiya Parivara must be au courant in the poetic field.

The Rasika Path is the Path fraught with enormous danger, because it is basically enormously misunderstood and everyone must be on the qui vive, reading the Devotional Poetry of Gaudiya-Acharyas, because this Poetry is NOT so blunt and mundane as some harebrained buffons imagine it to be in their narrow-scoped heads.

The too literal and mundane interpretation of verses must be avoided and of course Bhagavan Shree Krishna is NOT primitive, plain, square simpleton, Who can be described as a lad living in Vrindavan, dancing from time to time and, excusez moi, eating sweet rice balls with friends.

Such simpletonic idea is obnoxious in all respects and of course it is not supported by Gaudiya-Acharyas.

If someone is really desperate to know about Bhagavan Shree Krishna, then one must study Six Sandarbhas of Shree Shreemad Jiva Goswami in which Shree Shreemad Jiva Goswami clearly states that Bhagavan Shree Krishna is Acintya (अचिन्त्य - acintya), Shuddha-Sattva, Agocara (अगोचर - agocara) LORD, WHO possesess SHAT-AISHVARYA (SIX UNIQUE DIVINE TRAITS) in a ne plus ultra degree.

Can the English of Gaudiya-Poetry translation be Rasika and what is "RasaSvadana"?

Splendid question, which entails the enormous bunch of problems, but before answering the question such term as "RasaSvadana" (or "RasaSvada" - रसास्वाद) must be explained.

In terms of Sanskrit Aesthetics "Rasa" can be vaguely translated as "Psychic and Spiritual experience", while "Svadana" translates like "the act of tasting".

If we use the simplified translation, then:

"Rasa" = "Juice, something, which can be tasted" and

Aesthetic Svadana (tasting) is very complicated phenomenon, which consists of levels and sublevels of various psychic and emotional states (Bhavas, Anubhavas, Laya, Cittalaya and thousands of them).

Actually, the Devotional Poetry is the Juice and a bhakti-yog is a person who is endowed with capabilty to svadana (taste) this juice.

The main problem here is that the Poetry in Original Sanksrit is considered to be the genuine juice, while the English translations are just something of meager quality.

Why this happens? Everything is because of alankaras.

In fact, there is no proper way to render all the Sanskrit alankaras and poetic techniques in English and it's the problem of pitiful concern.

But one day, out of blue, you find out that your masterpiece movie had been wrongly conveyed in movie theatres, because some scenes had been cut due to censorship, some music tracks had been changed and the voices of actors had been replaced to the foreign ones to make the movie suitable for international distribution.

Such situation actually happens with all the original Sanskrit Poetry.

Now, let's try to walk in the shoes of Sanskrit Author. When Sanskrit Authors had been creating the verses, they thought in Sanskrit and moreover, they supposed that only Sanskrit-speaking audience will be able to svadana (taste) this poetry.

That's why they have imbued their poetry with complicated puns, metaphors, allusions and thousands of other poetic tricks.

Let's grasp the nettle and see at the example from "Shree Ujvala-Nilamani" by Shree Shreemad Rupa Goswami.

I do remember that in one of the verses of "Shree Ujvala-Nilamani" (I am sorry, but I can't find this verse now) one Gopi notices in jest, that the other Gopi is so reserved today, that she reminds a bhkruti (भृकुटी).

"Bhkruti" (भृकुटी) is a rare word and it means the special kind of frog in Sanskrit.

And actually, the word "Bhkruti" (भृकुटी) enormously alters the perception of the verse. It is just one word, but it entails the following bunch of the assosiations:

1. The word "bhkruti" is funny itself and of course it causes the enormous gust of laughter in reader, that is Hasya-Rasa.

2. This word also points out the fact that these Gopis are very bosom friends and there is no reservation in their jokes towards each other (Sakhi-Rasa).

3. In terms of alankara word "bhkruti" conjuncts with other homonyms in the verse, creating beautiful semantic pattern.

4. This word is interwined in the sound pattern of the verse.

So, as it is seen, just one word in just one verse entails the enormous scope of Bhavas and Rasas in the reader.

But what about English translation?

Can the word "bhkruti" conveyed in English? Of course not.

It will be just a "frog" and if the translator is responsible enough he may point out that the special pun with the word "bhkruti" had been used in this verse, but in a stern reality most of the Sanskrit-English translators don't provide remarks at all.

So, the elision of just one word "bhkruti" leads to overall alteration of the verse and, confusion worse confounded, the Sanskrit sound pattern is lost forever, which is a drawback of sorrowful significance too.

So, there are 2 points to remember:

1) Semantic and sound patterns are lost forever in Sanskrit-English translations.

2) The verses of Gaudiya-Acharayas don't imply literal reading, but they imply the complicated aesthetic apprehension instead and the ability to grasp metaphors, puns and various Sanskrit Alankaras.

I have compiled this article, because there are more and more strange translations of Gaudiya Poetry these days. Some of the translations are too dry and emotion-void, others, au contraire, too emotional and sentimental. And neither of them is good, speaking truly. The sentimental ones are worst of the kind, because they act as a trap for silly people who erroneously claim that "Bhakti is an emotion".

If Bhakti would be an emotion, then we would be able to train dogs of Pavlov to be bhakti-yogs, but Bhakti-Yoga is more complicated experience, which imply very high literacy and Gyana.

In order to plunge in the discussed theme further, I just recommend to refer to "Chitra-Kavitvani" and examples of  exquisite and complicated Poetry construction of Shree Shreemad Rupa Goswami. 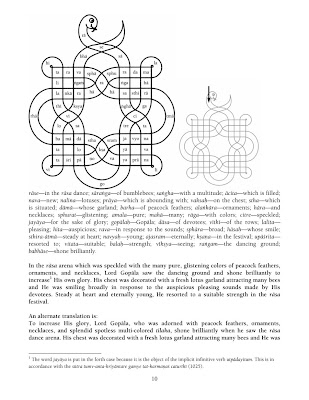 To my dismay several Volumes are missing.

I have made an accordance "Volume to Number in Chowkhamba Sanskrit Series":

The colour scheme of Laxmi Narayana Mandir is my favourite one! 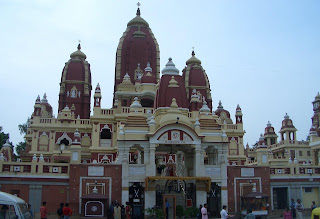 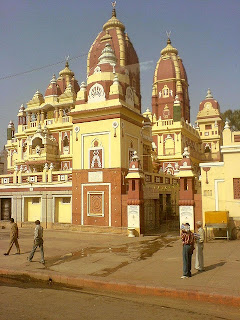 Information about the Temple from http://www.culturalindia.net/indian-temples/birla-mandir-delhi.html

"Laxminarayan Mandir is one of the major temples and landmarks of Delhi.

During 1933-39, Laxmi Narayan Temple was built by Mr. B.D. Birla of Birla Group of Industries, one of the famous business tycoons of India. Being constructed by the Birlas, the temple came to be known as Birla Temple.

Located on Mandir Marg near Connaught Circus in Delhi, the temple is easily accessible from the city by metro, local buses, taxis and auto-rickshaws.

Birla Mandir is first of the temples made by Birlas across the country and till date, the funds to support this temple come from Birla family.

The famous temple is accredited to have been inaugurated by Mahatma Gandhi in 1939.

At that time, Mahatma Gandhi kept a condition that the temple would not be restricted to the Hindus and people from every caste would be allowed inside. In those times, the condition was really worked upon; still people visit this temple with full devotion.

Laxminarayan Temple is dedicated to Lord Vishnu, the preserver and His Consort, Goddess Lakshmi. The architecture of the Temple looks imbibed from the Orissan Style.

Apart from the idol of presiding deity, the temple has remarkable idols of Goddess Durga, Lord Shiva, Lord Ganesha, Lord Rama and Lord Hanuman. Geeta Bhawan is a huge hall that is embellished with striking paintings, derived from the scenes of Indian mythology.

On the rear end, one can trace gardens and fountains in the temple complex. The two-storied verandahs, on the three sides, are overlooked by the interior court.

For tourists, temple authorities have made adequate arrangements of guest house in its complex. Many International scholars come here to learn about the Hindu religion and for the time, they usually stay in the guest house of Birla Temple.

Every year, Janmashtami (birthday of Lord Krishna) is celebrated with full gusto and fervor in this temple. In fact, Birla Mandir is famous for its celebration of Janmashtami. People in large number come to visit this temple of spiritual legacy".

"SHREE LAKSHMI SAHASRAM", Sanskrit with English Exordia and Yantras (at the last pages of the book), Shree Ramanuja Seva Trust, 1988 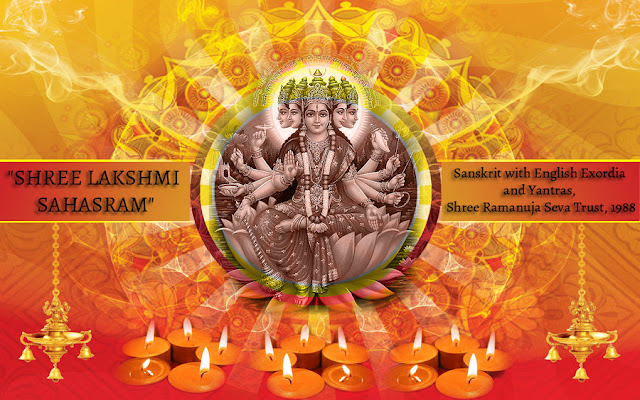 
English annotation by Vishnudut1926: Rahu-Venus Dasha is especially important for Raganuga-Bhaktas, because Bhagavan Shree Chaitanya Mahaprabhu has revealed His most elevated Leelas in this Dasha.

This summer I have entered Rahu-Venus-Venus antardasha and the result was shocking.

Earlier I was 100% worshipper of Bhagavan Shree Vishnu, but now my Sadhana is 90% devoted to Shreemati Maha Lakshmi Devi and to Shreemati Radharani Devi.

The rest 10% is devoted to Krishna.

Later I will post an article about my spiritual growth and, the silly thing from my side: I have totally overlooked that Venus is in 5th House in my Rasi.

5th House is the House of Bhakti, and Venus in 5th house indicates either the worshipper of Shreemati Lakshmi-Devi and Shreemati Radharani-Devi or a person belonging to Shakta-Tradition.

Anyway, I don't like the name "worshipper", because I love Shreemati Lakshmi-Devi as younger sakhi loves older Sakhi and our girlish love is mutual. This is the essence of Manjari-Bhava, which is strictly followed in Gaudiya-Sampradaya.

This Book is more than precious and if you like it, you should also learn by heart such Bhakti Masterpieces as "Ashta Lakshmi Stotram" and "Maha Lakshmi Prapatti".

Annotation from the book:

"LAKSHMI SAHASRAM" is a classic Sanskrit Kavya composed of 1013 verses in praise of Goddess Maha Lakshmi, in terse Sanskrit, replete with excellent grammatical, philosophical, literary and devotional expressions of great thoughts contained in the Upanishads, Epics & works of Poorvacharyas.

The Dvaya-Mantra of Shree Vaishnavas, consisting of 25 letters, has been expanded into 25 slokas by Shree Vedanta Desika in Srhree Stuti.

The same has been further elaborated by Mahakavi Arasanipalai, Venkatadhwari in this classic, into 25 chapters called "Stabakas" which amply testify that his mastery in all branches of higher learning viz. Tarka, Vyakarana, Mimansa, Vishistadvaita Vedanta & Alankara is par excellence. 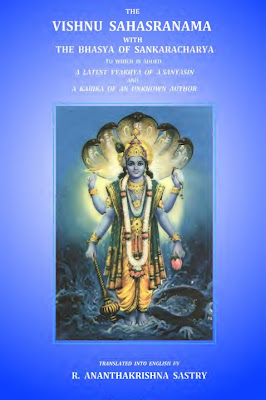 The variant of Shankaracharya had been deleted and replaced with pure Vaishnava Tikas by Shree Parashara Bhatta Acharya from Shree Ramanuja-Vaishnava-Sampradaya, see the scan here - http://vishnudut1926.blogspot.com/2017/12/sri-vishnu-sahasranama-with-bhashya-of.html 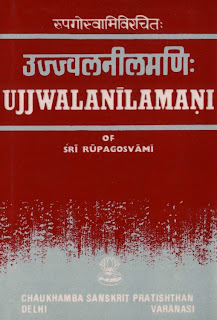 This is a part of my very old E-Library. In 2017 this segment had been replaced by the NEW VAISHNAVA E-LIBRARY, which can be found on: 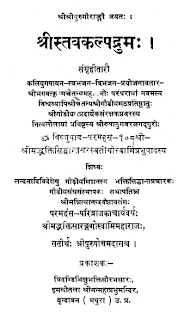 DThis is a part of my very old E-Library. In 2017 this segment had been replaced by the NEW VAISHNAVA E-LIBRARY, which can be found on: