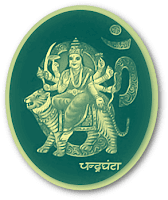 The following is the cite from one of The Tantras of Shreemati Durga-Devi. I am collecting greedily everything connected with sesame (तिल - tila), because white sesame is widely used in Shree Lakshmi / Shree Durga / Shree Vishnu Archanas (black sesame is used also, but for destructive black magic).