The following passage is from "SRIMAD RAHASYATRAYASARA OF SRI VEDANTA DESHIKA" (p. 197, the link to the electronic scan of The Book).


DELAY IN THE ATTAINMENT OF THE GOAL


Among prapannas, there may be (some) who, on account of certain specific evil deeds done in past lives which have begun to operate now, may become subject to such lapses as the following:


001. They may display the feelings of "I" and "mine" (ahankara and mamakara)

SOLUTION: In this matter, prapannas will never have the feelings of "I" and "mine"  in any deep-seated form such as the Charvakas (atheists) have. Even people who walk warily sometimes stumble; so also prapannas may, on rare occasions, show these feelings; but these improper feelings or notions will disappear by later wisdom originating in reason.

SOLUTION: In the Chapter on the atonement for offences, we explained how, if offences are committed, they will last only until the time of winning pardon or the undergoing of punishment and how the offences will be expiated within the required time.

In the case of those who performed Prapatti without indicating any definite time (for the attainment of moksha), it is said in "Shree Lakshmi-Tantra" (17.102):

"The man who has performed Prapatti to Me and who has not abstained from sins committed frequently, attains Me late after wearing out all his sins."

003. They may display a taste or desire for other objects than Bhagavan Shree Narayana

SOLUTION: Since the prapanna is bent on attaining moksha, he is not likely to have any longstanding desire for other benefits.

Like those who have both Brahma-bhavana and Karma-bhavana (Brahma, Rudra and the like), they might entertain a desire for other benefits along with the desire for moksha; if so, Ishwara, Who is their Well-Wisher, will not grant them those (so called) benefits (as they are not for his good ); for it is said:

"Even when the bhakta prays for it, Iswara does not permit him to do what is not good to himself. Does not the mother prevent her child that longs to fall into the fire?” ("Shree Vishnu-Dharma")

It is said also:


"He whom I want to bless - his wealth I take away from him. His relations will then desert him. He will become miserable. If, in his misery, he still clings to Me, I confer on him such blessings as are unattainable even for the devas." ("Shreemad Bhagavatam")

The same idea is found in the story of Kundadhara.

Sometimes Ishwara creates in the prapanna a distaste for these other things by making him realise that they are trivial, transient and mingled with pain. Sometimes, as in the case of Soubhari and Kuchela, He gives them the benefits desired by them, but makes them feel an aversion to them afterwards.

NOTE: Kundadhara: A certain man who was devoutly attached to Kundadhara begged him for wealth. Kundadhara, instead of granting wealth, saw to it that his follower should become attached to Dharma.

Thus the man who performed Prapatti indicating the time when he should attain moksha, will have acquired an aversion to other benefits than the Lord within the prescribed time.

In the case also of the man who did not indicate any such time while performing Prapatti, there will be delay, as has been stated in "Shree Lakshmi-Tantra" (17.103):

"The man who is desirous of performing such karma as is a means of obtaining other benefits (than God) enjoys pleasures unmingled with pain, and at last acquires a distaste for them (and the spirit of renunciation), after which he reaches The Abode of Bhagavan Shree Narayana".

In accordance with this, the delay in his attainment (of the supreme goal) will be only until the birth of aversion to worldly objects.


004. Owing to this desire they may contact other deities.


SOLUTION: In regard to contact with other deities, the Ruler of All will bring him back some day or other into the company of those who are staunchly and exclusively devoted to Bhagavan Shree Narayana, correct his lapse until he gets ashamed and thus remove his deviation from the right path.

If, in some, this contact with other deities becomes permanent, it may be inferred that the adoption of prapatti as an upaya was incomplete in their case. It may also be understood that they may have such things as Naraka in future.

Note by Vishnudut1926: As only the Complete Prapatti (but not fragmentary) saves prapanna from Yama-Loka (it had been discussed by OM VishnuPad Vedanta Deshika in the previous Chapters of "SRIMAD RAHASYATRAYASARA").

In a man of this description, the fragmentary prapatti performed to Bhagavan may, at some time in the future, attain completion and become effective.

005. They may be weak-minded and owing to this (weak-mindedness), they may desire to adopt other upayas.

SOLUTION: In those who performed Prapatti after the rise of full and great faith, there will not be any weak-mindedness nor the desire to adopt other upayas.

If these, viz., weak-mindedness and the desire to adopt other means - are present, it is to be inferred that their former faith was not strong enough.

The Lord of All will correct these men also until they acquire great faith and make them perfect prapannas.

IF ALL THE 5 OBSTACLES ARE MISSING.

In the case of those in whom no such lapses occur, there is no possibility at all of delay in the attainment (of The Supreme Goal).

There will be delay for them only as long as they desire it. They will attain moksha at the time when they desire to have it.

The Adhikari who has attained the true state of a prapanna will always be the favourite of The Supreme Ruler, who is the Lord of Shreemati Lakshmi-Devi, as pointed out in the passage from Tirumalai (38):

"O, Thou, Lord of SriRangam, that delightest in those idle men (prapannas) who stand outer-most (as being incapable of Karma-Yoga, Jnana-Yoga or Bhakti-Yoga)". 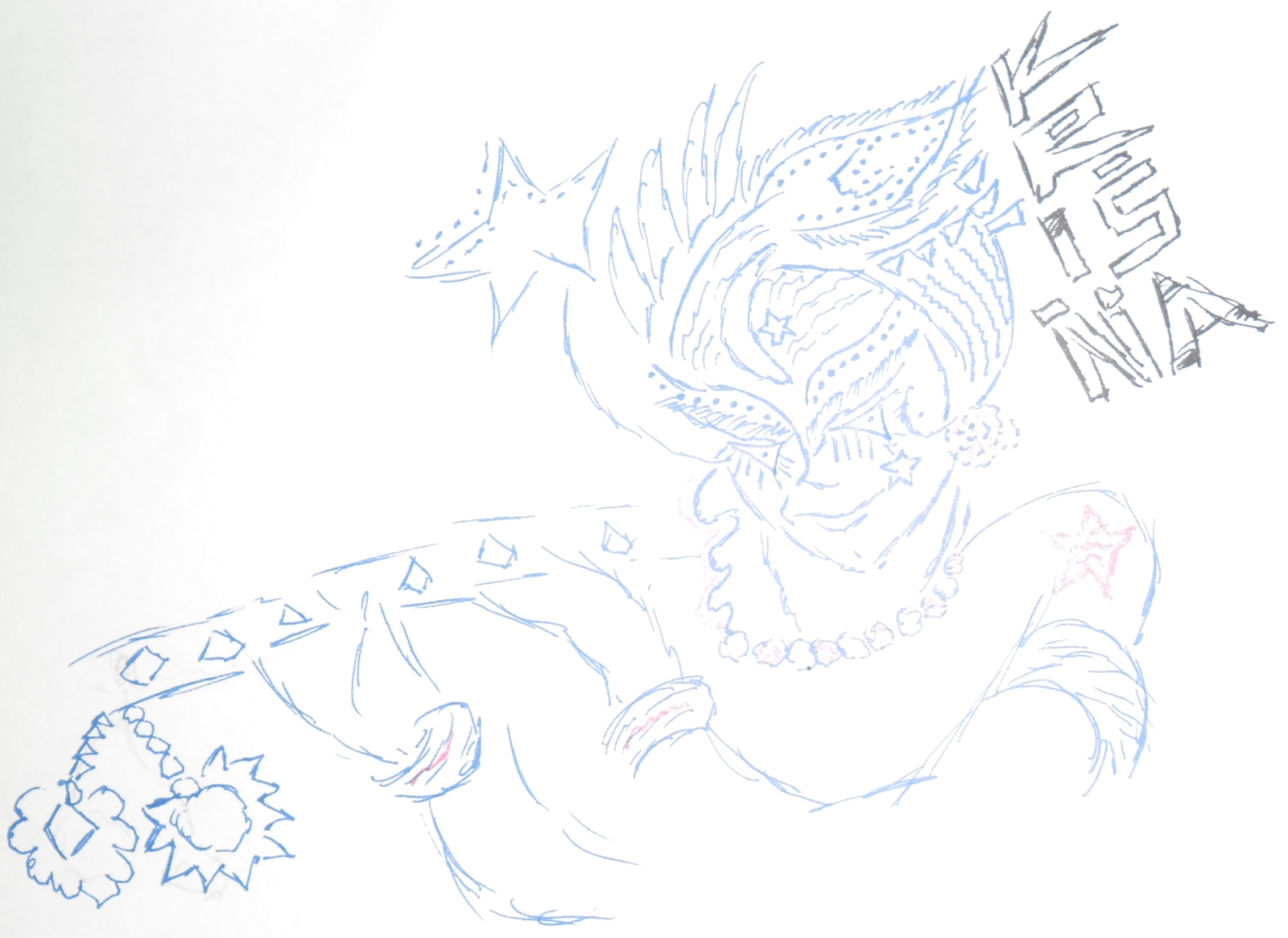 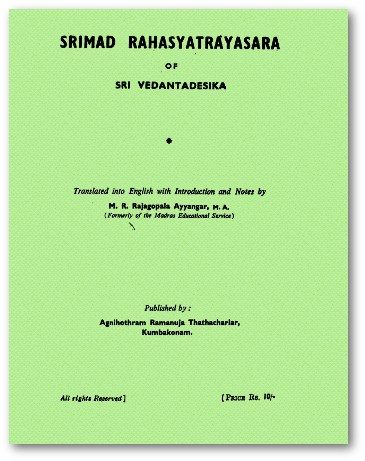 This is the incredible edition of "Shreemad Rahasya Traya Sara". Now among the first books in my E-Library.

I was more than impressed by the exquisite and superb English translation. While reading I have made a lot of notes, but I am going to return back to the book, as the book is truly Vishnuesque! 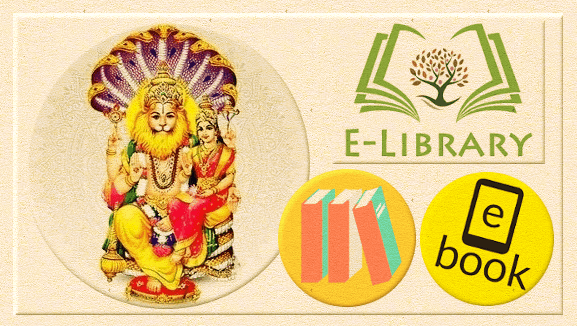