I have returned to my Art this summer and I am going to paint pictures of Shree Krishna.

The July and August will be very much events-imbued, because I am all crazy about my Yoga programme,  Art Lessons and Krishna Books!

I am reading "Shree Vishnu-Sahasranam" with the Tika by Shree Shreemad Shankara-Acharya now and this Book is masterpiece!!!!!!!!!!!

I will upload the Book later and I am going to start learning this Book by heart.

The first image of Shree Krishna  will be in very cold icy blue pallette.

I am going to add some raspberries and blackberries to this image.

I have the idea of painting a bunch of Shree Krishna Images with berries, because Shree Krishna and His Mood (Vrindavan Bhava) are perfectly comply with the images of various berries, especially the vines of raspberries and blackberries. 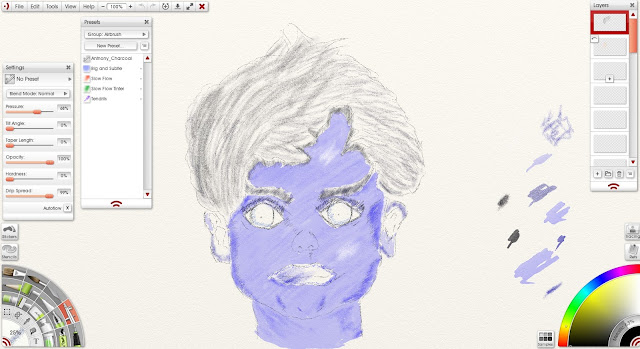 And I am playing music for Shree Krishna in C # Major scale today! 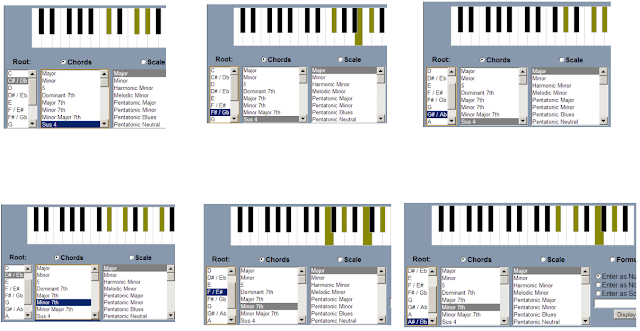 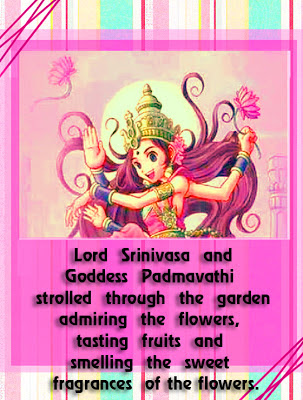 This Leela of Lord Srinivasa and Goddess Padmavathi (the article about Shreemati Padmavati-Devi) is one of the most beautiful legends!!!!!!!!!!

I have read this legend the enormous number of times and my favourite part of the story is very tender scenery with Shreemati Padmavathi-Devi, Who could not escape from the garden with Her Beloved Lord Shreenivasa.

Purasai Thota festival is celebrated in Tirumala every year to showcase the love of Lord Srinivasa to his devotee, Ananthalvan, a disciple of Bhagavad Ramanujacharya.


To  serve  his  Guru,  Anathalvan  volunteered  to  take  up the  task  of  growing  a  garden,  so  that  beautiful  fresh  flowers  could  be offered to Lord Srinivasa every day.

Anathalvan  worked  on  his  garden  very  diligently.  He  plowed  the  land, sowed  the  seeds,  tended  the  seedlings,  and  nurtured  them  with  love  and affection until they grew into beautiful flowering plants.

While farming he would often  imagine, Lord Srinivasa being adorned with the flowers that he  had  planted  in  his  garden.

He  would  also  imagine  his  Guru  being pleased with the service he was doing to the Lord and that inspired him to grow & maintain the garden with utmost devotion & dedication.

Ananthalvan and his wife would work in the garden the whole day adding more and more plants, removing weeds, making pathways, watering plants and  plucking  colorful  and  fragrant  flowers  to  make  beautiful  garlands.

These garlands were then offered to Lord Srinivasa every day.

Lord  Srinivasa  and  Goddess  Padmavathi  were  in  awe  at  the  variety  of flowers  being  offered  to  them,  that  they  decided  to  see  the  garden  for themselves.

So  one  night,  when  the  sky  was  clear,  the  stars  were  out  and  moon  was shining  brightly,  Lord  Srinivasa  &  Goddess  Padmavathi  appeared  in Ananthalvan’s garden amidst the fragrant flowers.

The garden was in full bloom with flowers swinging gently to the breeze.

Lord  Srinivasa  and  Goddess  Padmavathi  strolled  through  the  garden admiring  the  flowers,  tasting  fruits  and  smelling  the  sweet  fragrances  of the flowers. 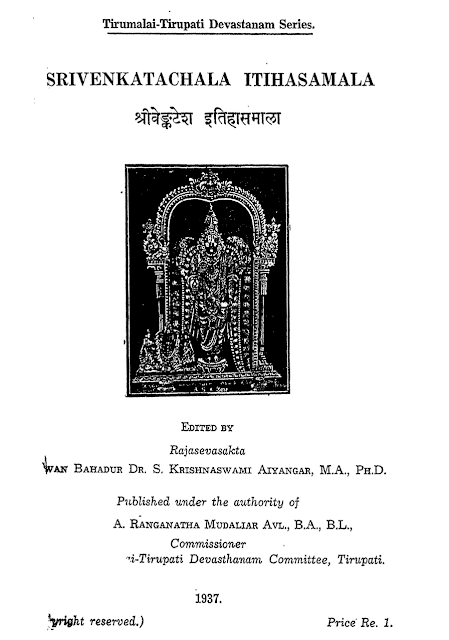 
English annotation by Vishnudut1926: "Shree Venkatachala Itihasa Mala" or "The Garland of Historical Tales of the Hill of Venkata (Tirupati)") is very famous Grantha of Shree Ramanuja Sampradaya.

The Grantha tells about very prominent episode in the life of Shree Shreemad Ramanuja-Acharya and His dispute with Shaivas over the Temple of Bhagavan Shree Vishnu (which Shaivas erroneously claimed to be the Temple of Skanda) .

The English exordia is extensive and the English synopsis of each Stabaka is included. 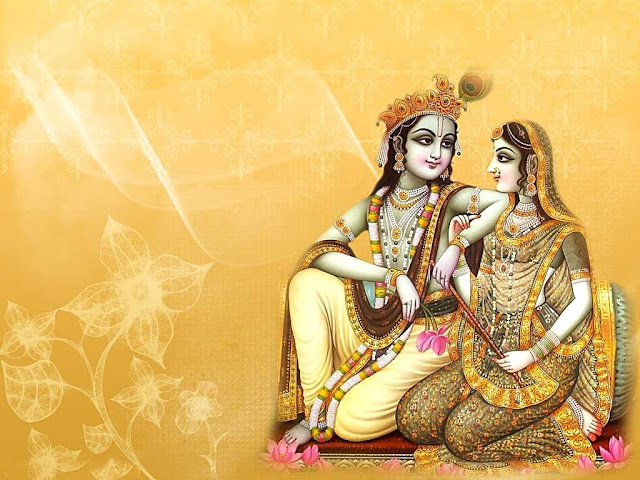 "Vasudeva Mahatmya" in my library

Narada, having ascended the peak of Meru, saw with his divine sight the Sveta-dvipa, also the people residing there, and the liberated who were thousands in number.

At once concentrating his mind on Lord Vasudeva, he flew from that place and instantly reached that abode. (1-2)

Having reached that great island, Narada, with great happiness, saw those white devotees shining forth with the lustre of moon. He worshipped then mentally and by bowing his head.

They also worshiped him. Narada, desirous of realizing that Supreme Brahman was spending his time in penance at that place. (3-4)

Those devotees of the Lord residing there realizing that Narada was a dedicated devotee of the Lord, told Narada who was chanting the twelve-syllabled mantra, with great joy.(5)

The liberated souls of Sveta-dvipa said: 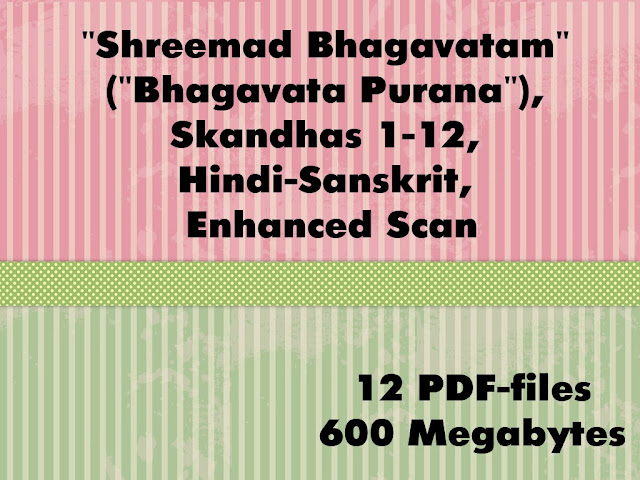 This is the new scan of "Shreemad Bhagavatam" and there are 12 pdf files. 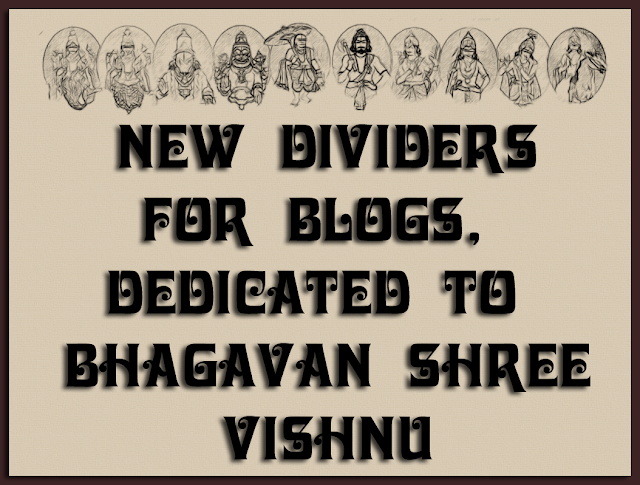 I have created new dividers based on DashaAvatara images today.

There are 14 pcs., most of them are rendered through artistic Photoshop filtres.

And in Dropbox folder too - https://www.dropbox.com/sh/18jvq9f871wjew4/VhoTCrY7XM

These dividers had been created from the following illustration from magazine: 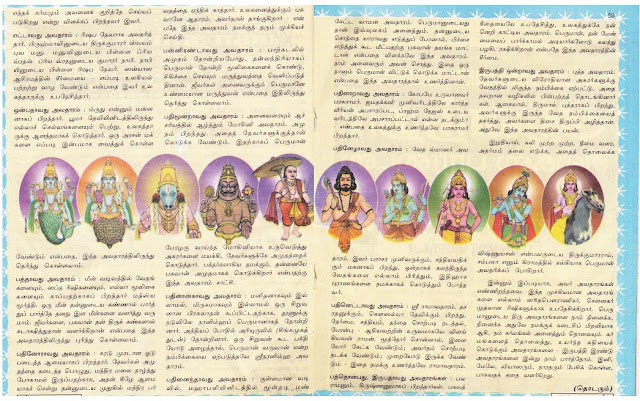 The illustrations from Hindi edition of "Skanda-Purana"

The illustrations from Hindi edition of "Skanda-Purana", a set on Flickr.

I have been been scrolling through the Hindi edition of "Skanda-Purana" today and found the illustrations in it to be very vivid.

I have copied them from PDF-file, then applied "Auto-Colour" filtre in Photoshop (because the scan was too pale) and made some English inscriptions for non-Hindi speakers.

This Gallery also can be seen on: