Our Adorable and Precious Krishna is especially fond of pink lotuses!

Even The Dhyana of Our Enticing Husband starts from 8-Petaled Pink Lotus. Such the enticing and enthralling Dhyna!

In Krishna-Dhyana Krishna is not Dark-Blue, but Brilliantly Light Blue.

Krishna is usually clad in Yellow Garments. Remember that in The Spiritual World all the colours are enormously enhanced and advanced and don't resemble the colours of this world at all.

So, if you truly feel Krishna-Dhyana, you will see Krishna in The Divine Brilliance of Golden-Yellow, Light Blue and Blazing Pink!

And Krishna is never alone, always surrounded by The Most Beloved Gopikas (Shreemati Radharani-Devi and Major Gopis) and by trillion of Other Gopikas!

So, as you see Krishna-Dhyana is Highly Artistic and Charming!

But in The Homa only red lotuses must be used.

If you are fond of Krishna Colours please also see this post about "Gulabi Gangour" - http://vishnudut1926.blogspot.ru/2014/10/gulabi-gangour.html 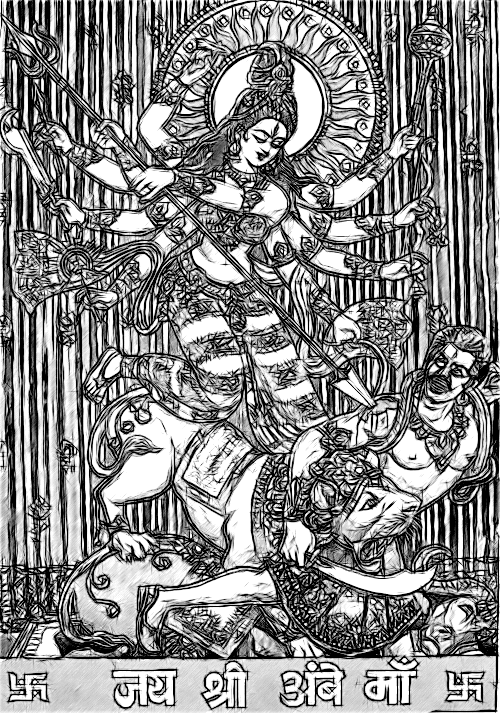 "Shree Skanda-Purana" is Divinely Unique. Volumes of Astonishing, Hair-Raising and Heart-Stopping Plots with associative arrays so heart-stirring...Words fail me here...

Actually, to speak in a "Honest to GOD" way, every time I read "Shree Lalitopakhyana" or the Stories from "Shree Skanda-Purana" or "Agni-Purana" (read the Story of The Appearance of The Ferocious Avatara of Shreemati MahaLakshmi-Devi from "Shree Agni-Purana", it will devoid you of sleep due to Love and Emotions) I feel like I am among the Most Darling Relatives in the World.

The Girlish Part of Puranas always make you feel like you would like to be a dasi of The Ishvari, you are listening to about.

When you, for example, read how Shreemati MahaLakshmi-Devi Drinks the wine from the gobblet and then Destroys everything around (in The Adhyay from "Shree Agni-Purana"), your only musing is: "What The Incredible GIRL MAHALAKSHMI IS, I want to be totally crushed by my girlish love for HER and I want to be only near HER as one from the trillion of Her dasis in order to serve HER".

This Sui Generis Stotra is running after the Story of The Appearance of Shreemati Durga-Devi.

In Sanskrit "वज्रपञ्जर - vajrapaJjara" means either "Very Secure Shelter" or "Adamantine Cage" or "The Diamond Fort".

Actually, it is not The Stotra but STOTRA + KAVACHA and I was tremendously amazed, when started to read This Stotra as Stotra and started encountering the patterns like "Shiro me patu", inherent to Kavachas...

Then I was in a state of a sheer shock, which had been aggravated by the fact that The Namas of The Chief Shaktis of Shreemati Durga-Devi are being called to the attention in The Stotra too.

So, as you see The Stotra is really Heart-Blasting...

As for me, I am not going to add This Stotra-Kavacha to my sadhana, as I am totally addicted to my MahaLakshmi-Kavachas and Vishnu-Kavachas.

But if you a Dasi of Adi-Shakti and just build/rebuild your SHAKTI-SADHANA, then do all the possible to learn This Stotra in Sanskrit.

1) ENGLISH: It is Volume 11, Chapter 72, page 220 in the 2002 Motilal Banasirdass Edition of "Shree Skanda-Purana" (there is no use in English Variant from practical point of view, as all The Sanskrit Prayers must be recited ONLY IN SANSKRIT).

As you see, The Name of Our Adored ParaIshvari has prolonged "A" at the end, while the name of the demon has no prolonged vowels at all.

Now, The English Translation (from Volume 11, Chapter 72, page 220 in the 2002 Motilal Banasirdass Edition of "Shree Skanda-Purana").

1. O Skanda, O son of The Omniscient Lord, O Delighter of The Heart of Shreemati Parvati-Devi, Who were all those Shaktis? Tell Their Names to me.

2. O Pot-born Sage, I shall tell The Names of Those Great Shaktis born of The Limbs of Shreemati Uma-Devi.