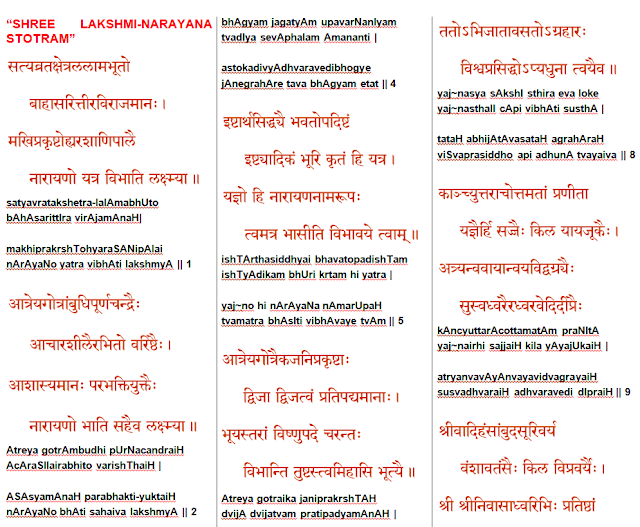 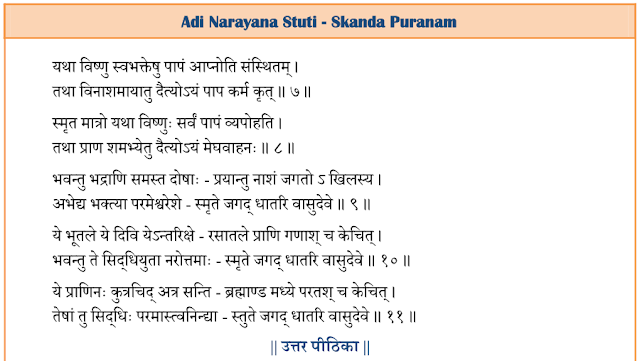 The addition to my Stotras and Stuti.

The version is only in Sanskrit.

Lord  Shiva  describes  Adi  Narayana  Mahatmyam  to  Goddess  Parvati  in  this chapter and this prayer appears as part of this.

The Uttara Pitika (which appears a few sholkas after the end of prayer) explains the benefits of worshipping Lord Adi Narayana Govinda:

One who prays Lord Adi Narayana on the  Ekadashi day (i.e. chants this prayer after due worship) gets the benefit of performing Ashwamedha Yajna and enjoys sojourn in celestial abodes.

One who has the darshan of Adi Narayana Govinda with due devotion gets the benefit of donating one lakh cowns to brahmins.

One who worships Adi Narayana  on the Ekadashi day which falls on a Sunday after due oblation in holy water gets relieved from the bondage of Bhava.

This prayer could be used on a daily basis to remove one’s sins and misfortunes and attain true Bhakti to Lord Narayana. 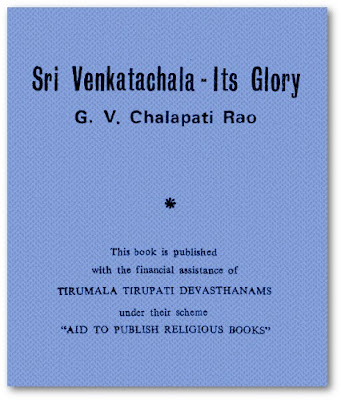 
English annotation by Vishnudut1926: To Bhagavan Shree Narayana VenkataChala is dearer than Vaikuntha-Dhama!!!

There is a Prayer in Chapter 19 and this Prayer will grant you Salokya-Mukti if you recite the Prayer 6 months (in Sanskrit)!

This Edition has been found by me on archive.org, but the book was in DJVU and the page order was disorganized.

I have converted the Book in PDF and then have altered the page order in PDF X-Change Viewer.

Nevertheless, about 6 pages are still missing in the Book, but it is not very crucial for the information grasp.

Not to get perplexed in all the Editions I have uploaded this year, the 4 editions are present in my Library now: 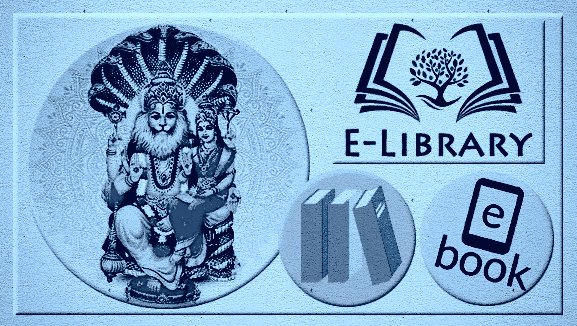 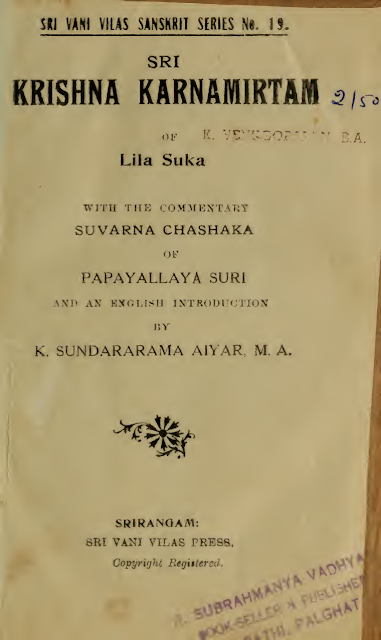 THE FOLLOWING ARTICLE IS FROM http://sadagopan.org/oa/oa11.htm

THERE ARE TWO BEAUTIFUL AND DELECTABLE STOTRAS ON KRISHNA AND RAMA BY SRI LEELA SUKHAR OF KERALA AND ONE OF THE PEETATHIPATIS OF KANCHI SANKARACHARYA'S LINEAGE RESPECTIVELY.

ON THIS SECOND DAY OF DHATHU SAMVATSARA NAAVARATHRI, LET US MEDITATE ON THESE TWO MASTER EULOGIES ON SRIMAN NARAYANA.

BOTH THE AUTHORS WERE OF SAIVITE FAITH AND WERE EXEMPLAARS OF THE FAMOUS ADAGE ON SAMA RASAM KNOWN AS "ANTHA: SAAKTHO, BAHIR SAIVO, VYAVAHAARESHU VAISHNAVA: ".

Since he described with great joy the leelas of Krishna like Sukha Brahmam, the author of Srimad Bhagavatham, he came to be known as Leela Sukhar. He belongs to the tradition of great devotees of Krishna of Kerala such as Narayana Bhattadhiri, the author of Sri NarayaNeeyam, Poonthaanma and Vasudeva Nambhhodhri and other great scholars of Dasama skhandham of Srimad Bhagavatham.

In his early life, he was very fond of a Deva Daasi by the name ChintAmaNi. She teased him once about his scholarship in VyaakaraNam, Naatakam and Alankaara Saastram and told him that if he had one thousandth of the affection for Bhagavaan, he would easily save his life.

That was the turning point for Bilva MangaLar.

He thanked Lord Krishna for deflecting his obsession with ChintaamaNI towards Him and immersed himself in Krishna chintanaa.

He started his masterpiece called Krishna Karaamrutham with the slokam:

There are 328 slokaas in this masterwork and every one of them is a Karna Ranjani. He concludes with the last slokam with the passage:

He prays to the Lord and says: " May this work of Leelaasukhaa be a nectar to the ear of the hearer and be that way for the span of time beyond one hundred kalpam (Chathur yugam) ."

There is a tradition to worship Krishna as Gopaala Sundari. The mantram for that murtham has 33 beejaaksharams and is made up of Sri Rajagopaala Mantram's 18 letters and the 15 letters of Sri Pancha Dassakshari of Sri Vidyaa.

In fact, the Lord of Raja Mannargudi (Dakshina Dwaarakai), Sri Rajagopalan is meditated upon as Sri Vidya Raajagopalan and is said to have Sri Chakram under the lotus feet of his archaa murtham at this temple.

His alankaaram as Mohini (Madana Gopala Sundari) during His Brahmothsavam is well known.

One of the descendants of Kamakoti peetam known as Bhodendra Saraswathi was a great believer in Sri Rama Naama Siddhaantham. He abdicated his position as the head of the mutt and retired to a village known as Govindapuram near KumbakoNam and created the slokas of the delectable Sri Rama KarNaamrutham.

He was a predecessor to Saint Thyagaraja and his successors, who spread Rama Naama Siddhaantham on the banks of Cauveri. I have written earlier about his attaning Jeeva Sammadhi in the sands of Veera Sozhan river,a branch of Cauveri.

I will conclude this posting with one piece each from the two Karnaamruthams. The words chosen in these verses are in simple Sanskrit and full of the spirit of a Bhaktha's yearning and search for the Lord"s Darsana Sowbhaagyam.

(O Deva Deva ! O Object of my supreme affection! O the friend of the Universe ! O Krishna ! O Lord who melts with compassion over the welfare of your devotees ! O ocean of Mercy ! O Lord of mine! O delight of my eye , who warms my heart ! Alas ! I am suffering without your darsanam . When are you going to present yourself before me? )

( O Raama! O Beautiful one ! O the supreme (Hero ) warrior of the World
O Lord of mine! O the chief of the Raghu race ! O ocean of mercy! O delight of Sri Janaki ! O the true friend of this universe! Please save me , the ungrateful wretch !)

The beauty of individual slokas of both the Karnaamruthams is over powering. I will quote and comment briefly on them in subsequent postings.
Oppiliappan Koil Varadachari Sadagopan 
Three New Stotras has been prepared by me for printing on one double-sided list of matte photo paper.

I have corrected the wrong Sanskrit variant of "Shree Hari Stotram", which, sorrowfully, is very popular in Internet. You can read the article about the errors here - http://vishnudut1926.blogspot.ru/2013/10/warning-how-i-proofread-sanskrit.html

"SHREE KRISHNA DWADASHA NAMA STOTRAM” has also been amended by me - http://vishnudut1926.blogspot.ru/2013/10/shree-krishna-dwadasha-nama-stotram.html

I have used the rights Variants from http://prapatti.com/, when I was preparing the corrected variants and thanks very much to this site for Stotras, they publish!

WARNING: How I proofread Sanskrit Stotras and why you should always check the right Sanskrit pronunciation

Currently you can find a lot of Sanskrit Stotras in the Internet, but the very huge problem with all of them is that very often you can encounter the Stotras with a huge array of mistakes.

I am compiling the very good variants of Stotras for my new blog Rubrique "Stotras" (all the Stotras uploaded will be for print on double-sided matte list in Devanagari and ITRANS - itrans for those, who don't know Devanagari).

The problem is when I have started to proofread Stotras I was outrageously shocked!

Usually, I am compiling the Stotras in the following way:

1) I am searching for Original Sanskrit Text, which you can "copy-paste". The "copy-paste" is needed, because I am converting "Devanagari to ITRANS" (in order not to scare non-Indian audience with just Devanagari letters).

2) Then I copy the Devanagari and ITRANS to WORD, delete <br /> tag with "CTRL+H" and use 2 or 3 columns formatting in order to fit the Stotras in the format "one double-sided matte list".

4) Then, it especially refers to popular Stotras, I am searching for good youtube clip, so the audience could not only read the Stotras, but to hear it (youtube clips are especially crucial for those who want to learn the Stotra, because when you hear the Stotra in Music form, you will memorize It very in a very swift way)

If you use "copy-paste" conversion, it will look like this:


THE EXAMPLES OF ERRONEOUS STOTRAS FROM POPULAR SITES.

Let's look at the examples:

Here is the totally mistaken variant of "Hari Stotram" (the picture above), which you can find on some of Stotras sites.

For example, the variant from http://desipedia.desibantu.com/sri-hari-stotram

If you "copy-paste" the Sanskrit Version from the link above, the Verse 01 will sound like this:

What's wrong with this variant from Desipedia? Nearly everything, because the Verse 01 is ruthlessly ruined by very wrong Sanskrit.


What is "kachada kanda malaM"? How you can translate it from Sanskrit? In no way you can, because actually it is gibberish, created by illiterate transliterator of the Sanskrit.

Note, that this mistake is present in Sanskrit Text initially, that is it is not a mistake by Sanskrit-to-ITRANS converter.

Let's look at the RIGHT VARIANT in Devanagari:

And in the RIGHT VARIANT ITRANS:


As you can see, actually the very errouneos and not valid Stotra has been published on http://desipedia.desibantu.com/sri-hari-stotram and  a lot of similar sites, because people usually copy-paste the texts from one site to their sites and that' how the wrong variants spread like viruses.

http://prapatti.com/ is very reliable site with Stotras and I am checking all the Variants with their Variants.

The only problem with http://prapatti.com/ is that you can't "copy-paste" the text from their PDF-files, that is you can't make your own compilation of Stotras in WORD.

3) Using Google Transliterate Sanskrit and Devanagari to Roman converters for manual re-typing of Rare Stotras from Sanskrit Books (for those, who know Sanskrit)

That't how I am working on "SHREE HARI STOTRAM":

As you can see on the picture above I have copied a part of original "Shree Hari Stotram" in Sanskrit  and Roman, made a graphic file (PNG, JPEG, etc.), then I turned on "Always on top" in Irfan-View (Options - Always on Top) and what I am doing currently is just re-typing the Stotra in Google Transliterate.

When you need the long "A" in Google, you should type double "a", that is "aa" and etc.

When you, for example, need to type "ण्ठ" like in रमाकण्ठहारं, you should type nTha (yes, with capital "T"). When you are dubious about typing aksharas, then just test as many letter combinations as you can (th, Th, TH, tH and etc.)

Also check up the pop-up menus with the suitable variants in Google Transliterate, they will help you a lot:


How to recognize badly transliterated or even not genuine Stotra.

Badly transliterated or not genuine Stotras can be recognized by the following traits:

2) Stotras with suspicious origin, which you can't find nor in Puranas, neither in Tantras. For example, I have found "rare" Stotra, dedicated to Shreemati Lakshmi-Devi in the Internet.

So, the overall rule for all such cases: use only classic Stotras ("Shree MahaLakshmi-Prapatti", "108 Names of Shreemati Lakshmi-Devi" and other classical Stotras).

And, of course, check http://prapatti.com/ for proper pronunciation.