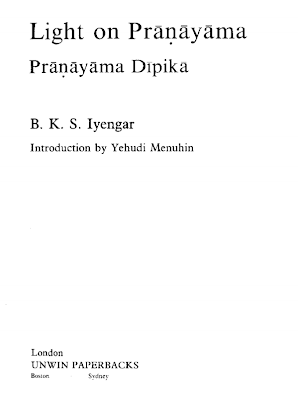 I don't use the complicated Pranayama, but I use the simplified complex instead, which is based on classic Pranayama techiques, but which is not so severe and advanced.

Nevertheless, if someone practice even the simplified complex, it is necessary to know about Chakras, Nadis and basic Pranayama techiques (such as Kapalabhati, Shitali-Pranayama, Surya and Chandra Bhedana and etc.)

Bija-Pranayama is something every Vaishnava should know about and practice. I have used Bija-Pranayama a lot about 3 years ago and I will write the separate article about it. 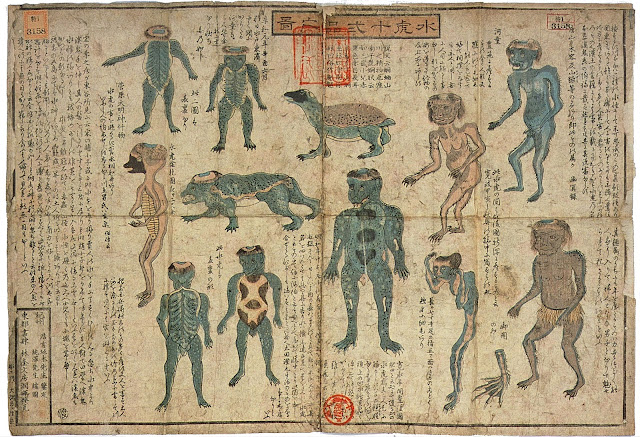 If you like to meditate in the night forests, deserted houses and other habitats without people, you know, that usually the habitats of this kind are also liked by rakshasas and other quarrelsome creatures.

Rakshoghna-Mantra was granted to us by Bhagavan Shree Krishna in order to eliminate the asuric influences.

If you are especially afraid of the above-mentioned creatures, you can attach Rakshoghna-Mantra to the door of your room.

In case you are extremely afraid of the evil influences, my recommendation is to learn how to use "Narayana-Kavacha", but it is rather complicated, as Narayana-Kavacha is based on Nyasas and takes about 30 minutes of rituals. 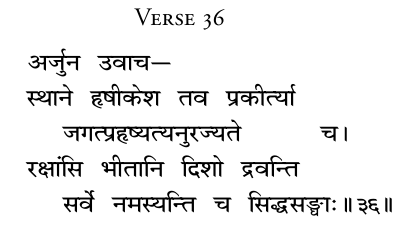 Arjuna  said:  O  Hrishikesha,  by  glorifying  Your  Name,  Form  and Qualities,  the  entire  universe  becomes  joyful  and  attains attachment to You. The demons scatter out of fear, while the hosts of perfected beings offer their obeisances to You. indeed, all this is most appropriate.

Shree Shreemad Vishvanatha Chakravarti Thakur:  "Arjuna  has  knowledge  of  the  following  truth: the divine form of Bhagavan is pleasing to those who are devoted to Him, whereas Bhagavan displays His dreadful feature to those who are averse to Him. Arjuna explains this while offering prayers to Shree Bhagavan. The word sthane is not declinable and it means ‘appropriate’.

“This entire world is being attracted to You by performing sankirtana (chanting) of Your glories.  This  is  appropriate,  because  this  world  is  devoted  to  You.

Rakñasas, Asuras, Danavas, Pishacas and so forth are running in all directions out of fear.

This is also appropriate because they are averse to You.

Hosts of beings who have become perfect by practising bhakti to You are paying obeisances to You. This is also appropriate because they are Your devotees.”

This verse is famous in the scriptures pertaining to the chanting of mantras, as the Rakshoghna-Mantra, a mantra for destroying demoniac elements (Rakshasas)". 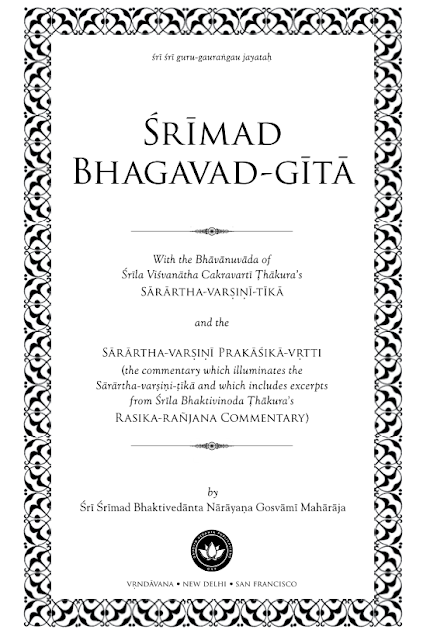 
English annotation by Vishnudut1926: Shree Shreemad Bhaktivedanta Narayana Maharaj is the Genius of Book Publishing and His Edition and Translation of "Shree Bhagavad-Gita" is out of this world and beyond any comparisons.

The commentaries of Shree Shreemad Vishvanatha Chakravarti Thakur were precious by itself, but Shree Shreemad Bhaktivedanta Narayana Maharaj has extended them and added a lot of Upanishadic explanations. And not only Upanishadic, but Rasik too!

But more than this: Shree Shreemad Narayana Maharaj has also added the synopsis of the commentaries by Shree Shreemad Baladeva Vidyabhushana and Shree Shreemad Bhaktivinoda Thakur (the Seventh Goswami in Gaudiya Lineage) in the Translation.

I have studied nearly all the translations of "Shree Bhagavad-Gita", but the variant of Shree Shreemad Narayana Maharaj is the Unique and the Best One from my point of view. 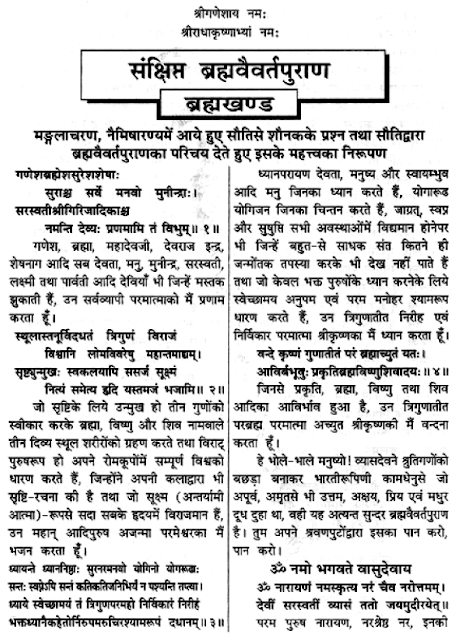 For me personally, the Story of Shree Shreemad Ashtavakra-Muni is especially crucial in this Khanda, because I have included this Stotra in my Sadhana in the Summer 2012.

This is the abridged edition of "Shree Brahma-Vaivarta-Purana", but it is worth of applausing, that all the Stotras were printed separately, starting from page 737.

If you would like to add new Stotras, devoted to Krishna, to your Sadhana, then check this edition and choose the Stotras you like the most.

I am not repeating The Stotra of Shree Shreemad Ashtavakra Muni now, but the printed variant, which I have compiled for myself is still very respectfully kept by me in my archive.

You can see the first page of Ashtavarka-Muni-Stotra on this photo.

As you see I have made Roman transliteration and Russian translation (not very exact, but very Siddhantic from Vaishnava point of view). 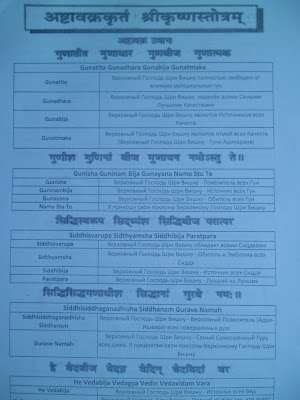 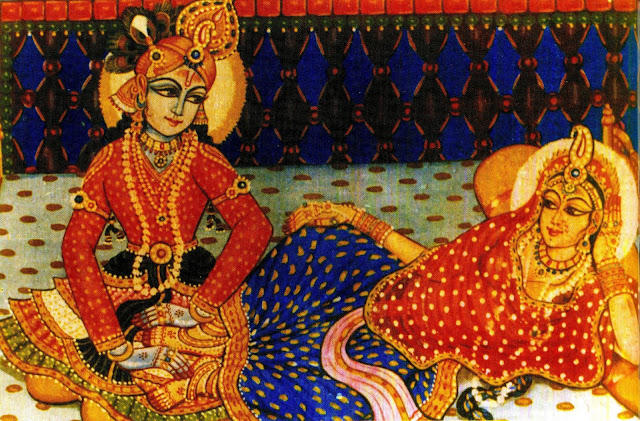 It is written in Wikipedia, that the story about the Marriage of Shreemati Revati Devi and Bhagavan Shree Balarama is from Mahabharata and "Shreemad Bhagavatam", but "Shree Vishnu-Purana" also tells us this very beautiful story ("Shree Vishnu-Purana", Book 04, Chapter 01).

If you are interested in the translation of the Name "REVATI" (रेवति), the Name translates as "Brilliant, Splendid, Opulent, Beautiful".

The following is the excerpt from the English translation of "Shree Vishnu-Purana". Shreemati Revati Devati is called "VIRGIN GEM" in this passage (I liked this epithet very much):

Not finding any one worthy of Her Hand, Raivata repaired with Her, to the region of Brahma, to consult the God where a fit bridegroom was to be met with.

When he arrived, the quiristers Haha, Huhu, and others were singing before Brahma; and Raivata, waiting till they had finished, imagined the Ages (Yugas) that elapsed during their performance to be but as a moment.

At the end of their singing, Raivata prostrated himself before Brahma  and explained his errand.

"Whom should you wish for a son-in-law?" demanded Brahma; and the king mentioned to Him various persons with whom he could be well pleased.

Nodding his head gently, and (graciously) smiling, Brahma said to him: "Of those whom you have named the third or fourth generation no longer survives; for many successions of agest have passed away, whilst you weere listening to our songsters.

Now, upon earth, the twenty-eighth great age of the present Manu is nearly finished, and the Kali period is at hand.

You must, therefore, bestow this Virgin Gem (Shreemati Revati-Devi) upon some other Husband: for you are, now, alone; and your friends, your ministers, servants, wife, kinsmen, armies, and treasures have long since been swept away by (the hand of) time."

Overcome with astonishment and alarm, the Raja then said to Brahma: "Since I am thus circumstanced, do Thou, lord, tell me unto whom the Maiden shall be given."

And the creator of the world, whose throne is the Lotus, thus benignantly replied to the prince, as he stood bowed and humble before him :

"The Being of whose commencement, course and termination we are ignorant; the Unborn and Omnipresent, The Essence of all things; He Whose Real and Infinite Nature and Essence we do not know, is The Supreme Bhagavan Shree Vishnu.

Bhagavan Shree Vishnu is Time, made up of moments, and hours, and years; One, whose influence is the Source of perpetual change.

Bhagavan Shree Vishnu is the Universal Form of all things, from birth to death.

Bhagavan Shree Vishnu is Eternal, without name or shape.

Through the Favour of The Imperishable Bhagavan Shree Vishnu:

I am (Brahma) the agent of his power in creation;

through His Anger is Rudra the Destroyer (of the world);

and the Cause of preservation, Purusha, proceeds, also, from Bhagavan Shree Vishnu.

Bhagavan Shree Vishnu, The Unborn, having assumed my person creates (the world);

in His Own Essence, He provides for its duration;

in the Form of Rudra, He devours all things;

and, with the body of Ananta, He upholds them.

Impersonated as Indra and the other gods, He is The Guardian of mankind and, as the Sun and Moon, Bhagavan Shree Vishnu disperses darkness.

Taking upon Himself the nature of Fire (Agni), Bhagavan Shree Vishnu bestows warmth and maturity, and, in the condition of the earth, nourishes all beings.

As one with air, Bhagavan Shree Vishnu gives activity to existence; and, as one with water, He satisfies (all wants); whilst, in the state of ether, associated with universal aggregation, He furnishes space for all objects.

Bhagavan Shree Vishnu is at once the Creator,and that which is created; the Preserver, and that which is preserved; the Destroyer, and, as one with all things, that which is destroyed: and, as the Indestructible, He is distinct from these three vicissitudes.

That (city) Kushasthali, which was, formerly, your capital, and rival-led the city of the immortals, is now (known as) Dwaraka; and there reigns a Portion of that Divine Being (of Bhagavan Shree Vishnu) in the person of Baladeva.

To Him, who appears as a Man, present Shreemati Revati-Devi, as a Wife.

Balarama is a worthy Bride-groom for this Excellent Damsel; and She is a suitable Bride for Him."

Being thus instructed by the Lotus-Born Brahma, Raivata returned (with Shreemati Revati-Devi) to Earth, where he found the race of men dwindled in stature, reduced in vigour, and enfeebled in intellect.

Repairing to the city of Kushasthali, which he found much altered, the wise monarch bestowed Shreemati Revati-Devi on the Wielder of the Ploughshare (Balarama), Whose Breast was as Fair and Radiant as crystal.

Beholding the Damsel of excessively lofty height, the Chief whose banner is a palm-tree shortened Her with the end of his plough-share, and Shreemati Revati-Devi became his Wife.

The king returned to the mountain Himalaya and ended his days in devout austerities. 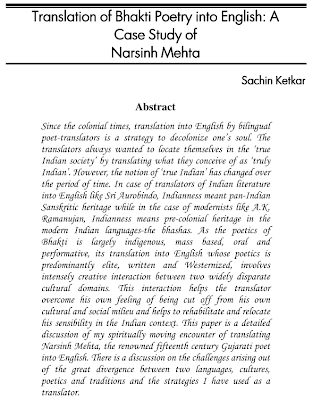 This article is masterpiece!!!

Originally, it is on 23 pages in PDF-file, but it is worth of reading several times.

Sachin Ketkar is writing about the same translation problems (the loss of semantic and sound patterns, cultural misunderstandings and etc.), which I have discussed in my article "Can the English translation of Gaudiya-Poetry be Rasika? Discussing "Chitra Kavitvani" by Shree Shreemad Rupa Goswami" - http://vishnudut1926.blogspot.ru/2013/08/can-english-translation-of-gaudiya.html

Sachin Ketkar writes about the problems of translation from Gujarati, but it may be equally superimposed to Sanskrit too.

The links for downloading the article below, but I will publish the most genious excerpts from it later:

The young and blushing bride of Bhagavan Shree Krishna is back

The young and blushing bride of Bhagavan Shree Krishna is back!!!

I will maintain blog till October. I would like to dwell on the changes in my Sadhana and some Books, which I am very ardous to share and to tell about.

For example, I forgot to share "Shree Brahma-Vaivarta-Purana" (Hindi edition with Stotras) and this fact nibbled my heart all this month.