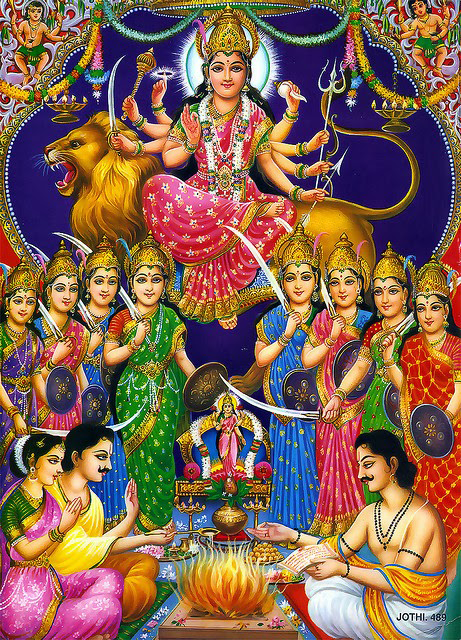 I am reading "Shree Lalitopakhyanam" (I will upload E-BOOK later) and the most scary moment in all The Devotional Literature is when Shreemati Sati-Devi is leaving The Body through the Ashtanga-Yoga and all Her Maidens plunge in the state of shock and despair.

I nearly fainted when I have been reading the scene. Imagine this scary state of losing THE MOST PRECIOUS PERSON in a flash.

To lose The Most Adorable Goddess in the world, you have served to, you have been amusing with jokes, you have been dressing up and was proud of being the part of Her Retinue!!!!!

The scene is very scary and emotional, though everybody knew that Shreemati Sati-Devi would be borne as Shreemati Parvati-Devi (and The Maidens were reborn in Himalays with Her too).

"When the spouse of Shiva, Satidevi, consumed Her Body in the flame born of Yoqa and rose up in the form of a Jyoti and vanished into the sky in the direction of the Himalayas, Her Devoted Hand-Maids and the many pramadhaganas*** and chiefs who had accompanied Her to Daksha's place, left the Yagna-sala (place of sacrifice) in haste and returned to Kailash with the empty chariot of Sati Devi, but they had not the courage to break the terrible news to Shankara.

With grief-laden hearts and tears streaming down their cheeks, broken-hearted and unable to utter words through sob-choked throats these Maidens stood before their Lord who, already divining the nature of the news, pressed them to speak out without any fear.

With halting speech their words interrupted by uncontrollable sobs, They managed to relate the entire sequence of what had taken place at Daksha's Yagna-sala, ending with the most unhappy but miraculous and wonderfully instantaneous incineration of Sati Devi's Exquisitely Beautiful Body which vanished in a flash of flame without leaving even a trace of ash behind".

But actually there is nothing spooky about this scene for Maiden-Servants of Shreemati Parvati-Devi as All of Them are Mukta-Jivas free from sufferings, death and rebirth and the scene with Shreemati Sati-Devi burning Her Body was the part of The Lila:

"As years piled upon years and the stream of time flowed on, Shreemati Parvati-Devi Girlhood passed and, in its place, was left a Dazzlingly Beautiful Maiden, Exquisitely Formed and Delicately Celestial - far surpassing Rati Devi herself.

During al these years the Lovely Damsels who had once been Shreemati Sati Devi's Near and Dear Attendants had also taken birth among the Himalayan hills and valleys and grown up as Play-Mates of Shreemati Parvati-Devi.

This bevy of Beauties now surrounded Shreemati Parvati-Devi and never left Her alone even for a moment.

The group resembled a cluster of variegated flowers with Queen-Lotus (Shreemati Parvati-Devi) in the centre".

Notwithstanding, the emotional effect of the scene (I mean the scene with Shreemati Sati-Devi leaving Her Body) is amazingly scary for those Bhakti-Yogs, who follow to Dasi-Bhava (Bhava of being the female servant of Adi-Shakti).