Of these two, I have an extreme repulsion for a person who has excessive affection for his relatives

I hate all my relatives, considering them to be mayik (the epithet "mayik" is too beautiful for them, because in reality my relatives are just stupid).

It is always more than necessary for bhakti-yog to be extremely educated in Gyana-Shastras.

The heart must be cold and compassion-and-emotion-void.

I suppose, that Bhakti-Yoga is not possible without Gyana and especially the awareness of everything being the illusion.

By the way, I also hate the idea of compassion, because it is just sentimental crap.

The following darshan of Shree Shreemad SwamiNarayan is incredible and very Gyana-imbued!

Two Undesirable Traits Of A Tyãgi 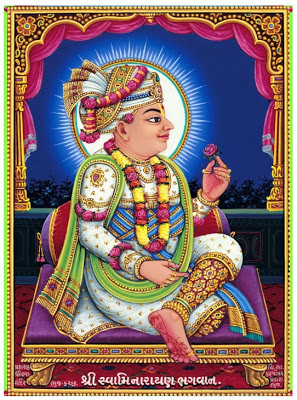 He was dressed entirely in white clothes.  Also, garlands of  mogrã  and  karnikãr  were  hanging  around  His  neck.    A  sabhã  of munis,  as  well  as  haribhaktas  from  various  places,  had  gathered before Him.

19.2  Then,  Shreeji  Mahãrãj  said,  “A  bhakta  who  has  abandoned  worldly life  may  possess  two  negative  traits  which  are  not  appropriate  for him in this satsang; the first is lust and the second is affection for his relatives.

In  my  eyes,  a  person  who  possesses  these  two  negative traits is like an animal.  Of these two, I have an extreme repulsion for a person who has excessive affection for his relatives.

19.3  “For this reason, a person who has abandoned worldly life should not keep even the slightest amount of affection for his relatives.

This is because having affection for bodily relatives is a greater sin than the five great sins.


Therefore, a tyãgi bhakta of Bhagvãn should realise his own chaitanya to be distinct from both the body and the relatives of the body.

He should believe, ‘I am the ãtmã; I have no relations at all  with  anyone’.


If a person does try to understand the greatness of  his  relatives,  knowing  them  to  be  satsangis,  then  since  there  is already  some  affection  due  to  the  fact  that  they  are  related,  he develops more affection for them than he has for  Bhagvãn and the bhaktas of Bhagvãn.

Therefore, if a person does keep affection for his relatives  knowing  them  to  be  bhaktas  of  Bhagvãn,  towards  whom affection is natural, then his life becomes useless.

So, a person who is wise should not keep affection towards a  person  who  is  serving  him,  even  if  that  person  happens  to  be  a bhakta of Bhagvãn.

For example, if a snake has released venom into sweetened milk, the mixture also becomes poisonous.

Similarly, out of self-interest, a person should not keep affection towards someone who performs his  sevã, even if the person serving happens to be a bhakta.

This is because his jeev becomes attached due to that sevã.

Then, just as he thinks about Bhagvãn, he also begins to think about the person who serves his needs.

For that person, this in itself is an obstacle  in  his  worship  of  Bhagvãn  –  just  as  the  young  deer  itself
becomes avidyã (mãyã) for Bharatji.

In this way, a bhakta of Bhagvãn should totally avoid all those who obstruct his worship of Bhagvãn, knowing them to be avidyã.”


19.5  Shreeji Mahãrãj then concluded by adding, “The paramhans and all the  sãnkhya-yogi  bhaktas  should  daily  say  and  listen  to  this  talk which  I  have  just  delivered.

Specifically,  the  senior  member  of  a mandal should daily narrate this talk, and others should listen. If the senior person fails to do so, he should do upvãs on that day.

Those who  do  not  come  to  listen  to  that  talk  of  Bhagvãn  with  shraddhã should also do upvãs.

Please remember these words firmly in your lives.”