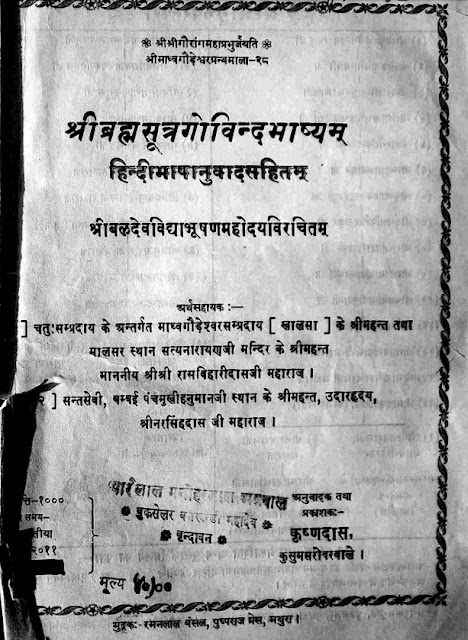 
Some pages of this scan in "shreds and patches" state and par excellence the Sanskrit part of the Book is damaged, while Hindi Anuvad is safe and sound. 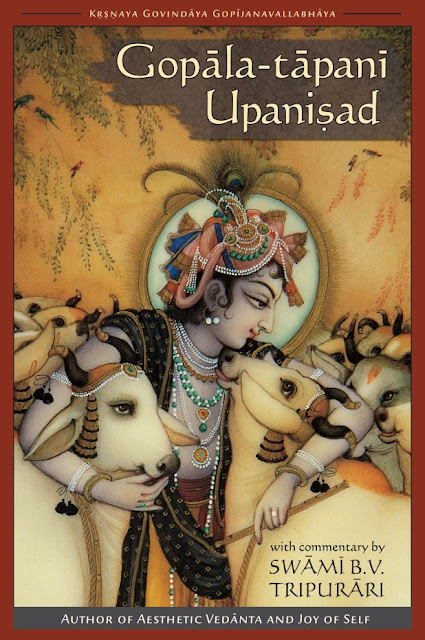 
Annotation by Vishnudut1926: I love "Gopala-Tapani-Upanishad", but bear in mind the following nuisance: the middle part is mayavadic and  Shree Krishna tells about ahangropasana (mayavadic meditation) in the middle part.

Don't be deluded by these mayavadic nuisances, because Bhagavan Shree Krishna has included them in "Gopala-Tapani-Upanishad" for the deception of silly and harebrained demons.

Of course, neither Shree Krishna nor Vaishnava-Acharyas ever support mayavadic ahangropasana, because it usually leads to Naraka-Loka or Kaivalya-Mukti, which is atmaghata (आत्मघात) for soul and worse than Naraka, because jiva can return from Naraka, but can never return from the state of Kaivalya-Mukti. 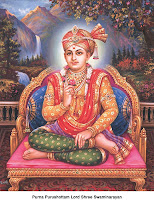 Purna Purushottam Lord Shree Swaminarayan has spoken the following words about false brahm-gyanis (dead vedantins) in "Vachanamrita" (Gadhada II, 18.4): The  shushka-vedãntis (dead or vain vedantis) believe  that  brahm  itself  has  assumed  the svarup of the jeevs – just as in the relationship between the sun and its reflection.

Therefore, when a person realises ‘I am brahm’, he has no  further  spiritual  activities  left  to  perform.

Then,  when  he  has become Bhagvãn, he does not need to worship anyone.  Thinking this, they no longer have fear in committing sins.  Moreover, they believe, ‘We have attained the nirgun path, so we will not have to take birth again’.

However,  the  shushka-vedãntis  do  not  examine  their  own understanding  which  implies  that  nirgun  brahm,  which  is  beyond Mãyã,  will  also  have  to  pass  through  births  and  deaths.    This  is because  they  claim  that  brahm  itself  has  assumed  the  svarup  of  all sthãvar  and  jangam  objects.

Therefore,  if  we  do develop  deep  understanding,  at  most  we  shall  realise  ourselves  to  be brahm-svarup.  But even then, the cycle of births and deaths will still not be dispelled’.

As a result, by their own beliefs,  moksh is proven false.

Nevertheless, no one examines this. Instead, they boast, ‘We are brahm-svarup, so who do we need to worship?  Who do we bow to?’

Thinking  this,  they  become  extremely  arrogant.

Even  though  they have  not  truly  understood  anything,  they  still  have  pride  of  their gnãn.  However, they do not realise that their own moksh is proven false by their own beliefs.  Moreover, they convert those who keep their company into fools as well.

Also,  the  residents  of Badrikãshram,  including  Uddhav,  Tanu  Rushi,  and  the  other  munis, perform tap and continuously offer bhakti to Bhagvãn.

On the other hand,  the  shushka-vedãntis  are  completely  oriented  around  their bodies.

Also, they do not perform dhyãn upon Bhagvãn, nor do they chant  the  name  of  Bhagvãn,  and  nor  do  they  bow  before  Bhagvãn.

Nevertheless, they equate themselves with Bhagvãn. Therefore, they are  absolutely  ignorant.

In  fact,  they  are  the  most  ignorant  of  all ignorant people.  Even after spending countless millions of years in the pits of Narak suffering the torments of Yam, they will still not be released".

Annotation by Vishnudut1926 (continued): There is also a famous story about the Brahmacharya of Shree Krishna in "Gopala-Tapani-Upanishad".

This story is told very often (for example, you can find this story in "Vachanamrita" by Purna Purushottam Lord Shree Swaminarayan and in Darshans of Shree Shreemad Bhaktivedanta Narayana Maharaja from Gaudiya-Sampradaya) and this story is also repeated in "Garga-Samhita" (the First Adhyaya of Madhurya Khanda). 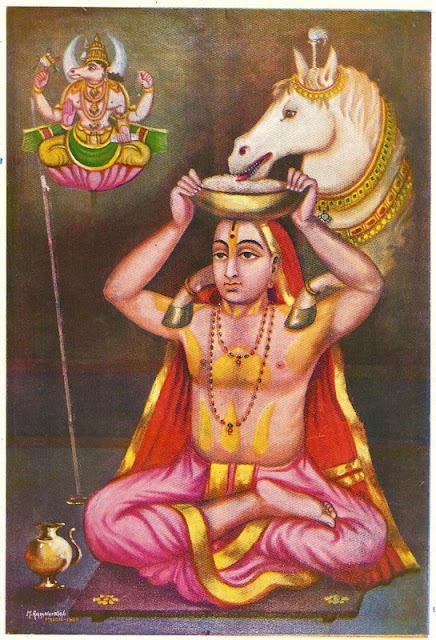 The following is the biography of Shree Shreemad Vadiraja Tirtha.

If you are curious about the horse on the picture above, then see the story in the end of this post!

He is widely regarded as being the incarnation of Lâtavya, a rju-tâtvika-yogi and the successor to Mukhya PrâNa.

Don't delay your visit to this really wondrous blog

This blog is really wondrous - http://murpriya.blogspot.ru/

The blog is entirely dedicated to Narasimha-Avatara. Review of Temples, Narasimha Hymns and a lot of very precious information had been posted in this blog.

Youtube-videos from this blog are very impressive too and I have included most of them into my memory book of Devotional Music.