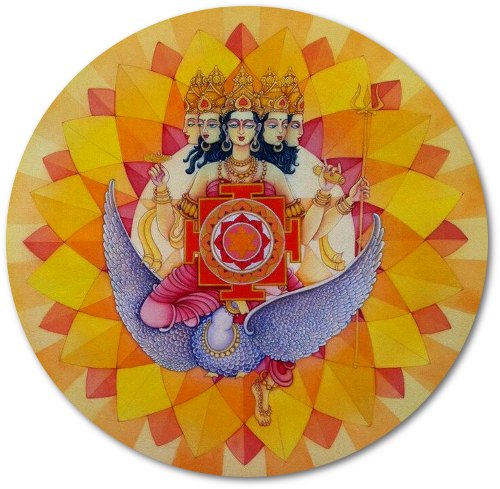 BRILLIANT AND AMAZING ARTICLE BY N.K. SRIVASTAVA ABOUT SHREE GAYATRI-MANTRA FROM 1936 JULY ISSUE OF "KALYANA-KALPATARU". I HAVE MADE THE FOLLOWING OCR FOR MY BLOG. 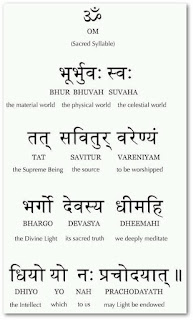 "The Gayatri Hymn is an attempt,—and a very successful one, too,—to catch within the web of language the direct experience of Ineffable Reality. It is regarded as the fountain-head of all the other hymns.

It is an embryonic mantra, for in it the first and freshest inspirations have been caught. It is the nucleus of the Vedas; it is the keystone of the magnificent Vedic arch.

There are nine concepts for God in it and they are supposed to be as covering as the nine figures in the theory of numeration.

Originally they seem to have been percepts, each one denoting a whole situation beyond the power and compass of language to describe; for on psychological examination some of them appear to be rhapsodical and frantic cries of the soul, pure exclamations of wonder and amazement at the direct experience of the Sublime,— highly dynamic Reality. So ecstatic monosyllables are they.

The nine divine concepts are:

1. OM (with the vowel sound sufficiently lengthened) meaning: at once All-pervading, Immanent and Omnipresent Protector of all.

2. BHUH: Being-in-itself; Sole
Reality; the ultimately only True; Existence absolute; the fountain-head of all energy and strength.

3. BHUVAH. Animation; the Warmth of Life; the Push of Life; Cosmic Consciousness; Knowledge Absolute; the Prime Mover; The Destroyer of miseries.

5. TAT: That which can only be experienced directly and can never be described: something too grand, too dazzling, too dynamic for the merely human intellect,— so feeble, so limited, so poor, so fumbling, so piteous, so phenomenal, so timid; something of which the soul alone,— stripped off of her limitations,— can have a glimpse.

It signifies the eternal, endless, transcendental Brahma (the Absolute ), the Infinite Supreme Being.

This is a sound-symbol for the gesture that the soul in ecstasy made to herself to take in more fully the vision of the Beautiful for later rumination. Here it serves the same purpose as the demonstrative sign serves in modern Logic.

It means quite a lot of things about God, some felt and known, others unknown and still others that must remain shrouded in mystery; it is one instance where the language of silence is more powerful than the language of speech.

6. SAVITUH: The First Cause; The Creator of the Universe; its Mover and Purifier; also the Sun that moves our intellect to duties;

7. VARENYAM: The Adorable; Admirable and Lovable One; Whose effulgence deserves unbounded admiration and ought to be sung in the most melodious of songs and must be sung constantly and ever.

8. BHARGO: The destroyer of sins; Pure Refulgent Being; Glorious, Radiant, Sole Divinity; the Light of all lights.

9. DEVASYA: of the Deva, i, e., the glorious, refulgent Lord who bestows upon us Life, heavenly bliss, unearthly happiness, divine Light, and victory.

It is through these concepts that the aesthetic contemplation is practised.

DHIMAHI: in perfect self-surrender we meditate ( on HIM ).
YAH: Who ( we pray )
PRACHODAYAT: may draw towards His Refulgent Majesty; impel towards the ethically good; inspire with His thought.
NAH: our
DHIYAH: Intellects ( Reason,Understanding ), deflecting them from this phenomenal world and from the path of Evil.

TRANSLATION OF THE HYMN:

WE MEDITATE ON THE ALL-PERVADING, IMMANENT, AND OMNIPRESENT PROTECTOR OF ALL, THE BEING-IN-ITSELF, TRUTH ABSOLUTE, THE LIFE OF LIFE, THE LIGHT OF LIGHT, THE DESTROYER OF MISERIES, THE BLISS ABSOLUTE, WHO IS ETERNAL, ENDLESS, TRANSCENDENTAL BRAHMA, THE FIRST CAUSE, WHO IS SIMPLY ADMIRABLE, AND WHO IS THE DESTROYER OF SINS, THE REFFULGENT LORD, GIVER OF LIFE, BLISS, LIGHT AND VICTORY.

PRAY DEFLECT OUR INTELLECT FROM THE PATH OF EVIL AND FROM THE ENTANGLEMENTS OF THIS ILLUSORY, PHENOMENAL WORLD AND FROM ITS ALLURING TINSEL AND GLAMOUR AND WITH (MIGHT) IRRESISTIBLE HELP IT TO THINE OWN REFULGENT AND MAJESTIC PRESENCE AND THERE LET IT STATIONED BE.

THE PLACE OF THE HYMN: 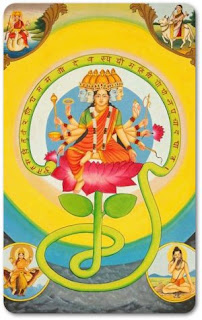 The Gayatri Hymn is the greatest among the Vedic hymns. It has been preached to the Gods of the Hindu Trinity (Brahma, Visnu, Mahesha) and to other sages and seers by God Himself.

Man has not been able to compose so beneficial and purifying a hymn as this. It contains the Nine Names of God, viz., OM, BHUH, BHUVAH, SWAH, TAT, SAVITUH, VARENYAM, BHARGAH, and DEVA.

Every Name has a couplet or sloka to explain it. Even as a man crosses a river in a boat, so does the devotee, the chanter of this hymn, cross the mighty ocean of this world through the mere repetition of these Nine Names.

God has been meditated upon through these Nine Names because they include all the Innumerable and Infinite Names of God. This hymn occurs in all the four Vedas in the same form.

Prayers ought to be offered four times a day and through this hymn, thus: early in the morning, at noon, in the evening, and at mid-night.

It may be noticed incidentally that, when people will get up in the middle of the night to say their prayers, there will not be any cases of theft and, when they will say it in the evening before going to bed, they will not have nightmares and bad dreams.

It is stated in the Upanisads:

“The repetition of Gayatri in the evening atones for the transgressions of the daytime; repeated early in the morning, it purges a man of his sins of the night; it brings on sinlessness to one who repeats it both morning and evening and secures perfection of speech (i.e. whatever the seer says must turn out true and actualize) to one who chants it at midnight. 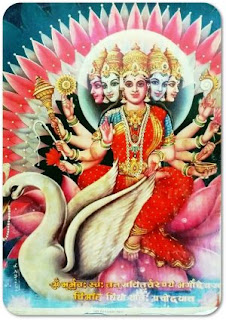 Its God or presiding Deity is Savita or the Sun God Himself. Agni (Fire) is its mouth. Viswamitra is its Rsi or seer. Gayatrl is its metre.

It is used in the sacred thread ceremony, in mystical breathing or Pranayama and for the purification of the soul.

This hymn is the fundamental, primordial of all the hymns.

Spiritual discipline, of necessity, consists of three parts: Contemplation, Meditation and Prayer. The Gayatri-Mantra alone contains all these three in the most splendid manner.

Contemplation is practised through the nine concepts of the Deity. DHIMAHI constitutes the meditation; in it the soul exhorts the intellect to surrender herself fully unto Him and to occupy herself with His thoughts.

Curiously enough, modern science bears out this truth directly. It is now asserted that without the sun life on earth would be impossible and that the sun is the only source of vitamins whence every organism draws its supply directly or indirectly.

"Dhiyo yo nah prachodayat" is the prayer in which the purity of the intellect, of understanding, and intense devotion is supplicated for.

There are five pauses or caesurae in this Mantra, which must be observed thus:

the first after ‘OM’;
the second after ‘BHUR BHUVAH SWAH";
the third after ‘TAT SAVITUR VARENYAM’;
the fourth after ‘BHARGO DEVASYA DHIMAHI;
and the fifth and last after ‘DHIYO YO NAH PRACHODAYAT.

At every pause one ought to stop for a while and think of the meaning of the Mantra.

“The substance of the four Vedas are the Upanisads and the essence of the Upanisads is The Gayatri-Mantra. He who has not imbibed the spirit of this Mantra or Hymn knows not an iota of the Vedas, even though he may boast to be the scholar of the Vedas".

“It is called Gayatri because its music brings salvation and liberation to the singer.” Again,

“This Mantra is The Mother, The Source Of The Vedas, Their Central Inspiration, The Burden Of Their Song. There is no Mantra either in this world or in the next, on the earth or in heaven, more purifying, more potent in destroying sins than This.” 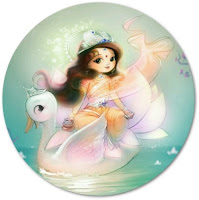 For spiritual purpose Gayatri-Mantra may be repeated in any manner whatsoever and there is absolutely no restriction of time and place. It always brings purification.

Manu has laid down that its mere repetition is ten times more fruitful than the performance of an ordinary sacrifice.

Even here its silent repetition where only the lips move is hundred times more effectual than when it is loudly said. Again, its mental repetition is even thousand times more sanctifying. It fulfils desires and in the end brings salvation.

The pose in all cases may preferably be the Siddha or Padma Asanas. It is the profound poetical quality of The Mantra that matters; its severe simplicity, its spontaneity, its deep insight and spiritual fervour, and not the petty rewards that its selfish repetition might bring.

AUM Thou Pure Being, Refulgent, Smiling, Sole Immanence! All-pervading Omnipresent Thou, HAIL THEE ! Thou Admirable One, Thou Glorious Effulgence, Thou All-in-All Creator of the Universe, Radiant Thou, HAIL THEE I Thou Truth, Beauty and Bliss!

Pray deflect our Intellect from the path of Evil and, with force irresistible, draw it towards Thine Own Majestic Eminence and, with Thy purpose divine, quicken it.

О! Intellect ours! Frail Creature! Be steeped in His Splendour. Be suffused with His Light,—of the Lustrous One,—the Light of all lights.

О intellect, dull fool, cease questioning; be absorbed in that Beatific Vision, that Light, that Life, that Love, that Joy, that sole fountain of Love, LIGHT, LIFE, and JOY. Exult and go mad.

Play high and keep naught; drink deep in His Measure and in it be lost for ever and for ever ETERNALLY.

Intellect, Piteous creature! Rise from the slough of Despondence! For once now rejoice, darling! Brace up, timorous one; for He smiles and nods. Reckon it. Duty is our word for His bidding.

Do it and never flinch and never swerve. Do His pleasure and ennoble thyself and thus His endearment EARN".