So, adhere to Vaishnava-Siddhanta you totally trust to. As for me I totally adore my native Shree Ramanuja-Sampradaya.

As for OM VishnuPad Ramanuja-Acharya and OM VishnuPad Vedanta Deshika Acharya They Both explain "Sayujya-Mukti" as "intimate relationship with Bhagavan Shree Narayana", that is in Madhurya-Bhava Terms (don't forget that according to Shree Ramanuja-Siddhanta all the jivas are FEMALE).

The more than excellent brief answer is given here: "sAyujya means communion with Brahman and absorption in Brahma-ananda-anubhava, but not absorption to the extent of total loss of identity.

It carries a connotation of intimate union as would be had by two lovers.

I don't think there is much support for it meaning aikya as it is derived from sa + yuj, where the latter dhAtu indicates a binding together.

Though it is not a principal upanishad, the term sAyujya is found in the oft-recited Narayana Upanishad. The ashTAkshara-mantropAsaka is therein promised sAyujya with Adi Narayana ('nArAyaNa-sAyujyam avApnoti')".

The superb gloss on Sayujya-Mukti had been found by me in "AV097 - Upakara sangraham part 3" by SADAGOPAN.ORG.

The following is the cite from this Book from page 81 and further:

"This kind of sharing the highest bliss by both the Lord and the mukta-jIva is known as sAyujyam.

It is considered as the actual mOksha. Some jIvas attain the worlds such as those of VishNu and the privilege of living in the same world as VishNu’s, which is called sAlOkya.

Some jIvas attain proximity to the Lord, which is known as sAmeepya. Some attain forms similar to that of the Lord which is called sAroopya.

These jIvas are also called muktas as upacAra (courtesy), since they are very near the ultimate goal but not actually muktas in the true sense of the word.

This is explained in the following SlOka, which is said to be in SrImad BhAgavatam:

This SlOka declares that only sAyujyam in SrI VaikuNTham is mOksha. Just as a hundred looks very small compared to one thousand, the same way sAlokya etc. are compared to sAyujyam.

The truth of this may be seen in the following SlOka (Jitante StOtram, 2-36):

(I do not at all beg for mOksha which goes by the names of sAlOkya and sAroopya. I long, Oh Lord, for sAyuja with Thee). sAyujya means the relationship between two persons who are united in communion (sayuk).

One might be sayuk with another, although only in the common enjoyment of certain pleasure. Here, in regard to the mukta, the object of enjoyment is Brahman with His prakAras or modes.

Since Brahman and the mukta both commune with each other in the enjoyment of that bliss, the mukta is called sayuk with Brahman.

In this case, a question arises: Why then in the same Vedic passage, the two words, sAyujya and sArshTitA are employed, when both mean the same thing?

sAyujya means that the same object is being enjoyed by the mukta and the Lord, just as two friends taste the same sweet. This is called bhOgya-sAmyam. (remark by Vishnudut1926: see the Tika of OM VishnuPad Ramanuja-Acharya to "Shree Vedanta-Sutra", 4.4.21 - भोगमात्रसाम्यलिङ्गाच् च...)

sArshTitA means the enjoyment of an object by the two is at the same level. The joy is the same for both.

In the world, we see that though many taste one sweet, the pleasure derived by them varies person to person.

This is despite the fact that, the mukta has nothing to do with the work of creating, maintaining and destroying and such other things in regard to the world (jagad-vyApAra).

That work is exclusively rests with the Lord alone. SwAmi Desikan compares this arrangement or difference to a father and others in a family.

The father cultivates the field and the sons and others who do not cultivate it, enjoy alike the fruit from the cultivated field.

The Lord Who is engaged in the work of the world and the mukta who only witnesses it have the same degree of enjoyment in the bliss arising from that work.

The Brahma Sootram deals with this subject in the “JagadvyApAravarjAdhikaranam” starting from 4-4-17.

(The mukta attains glory similar to the lord except in the matter of activity relating to creation etc. of the world; because, the context related to the activity of creation etc. of the universe belongs to the Lord and also because the liberated jIva is not associated with that context.)

(Because there is an indication that equality relates to mere enjoyment of bliss, the mukta is not having the function of creation etc.)

Here, a clarification is required to be made with regard to the attainment of sAyujyam by the mukta. There is a section of VedAntins (advaitins) who interpret this sAyujya mukti as oneness or identity with Brahman.

They term it as ‘aikyam’. This view is opposed to the etymological meaning of the word, sAyujyam, as well as vEdic texts which declare that Brahman is different from the jIva (svEtASvatarOpanishad, 1-6):

(In the wheel of Brahman, which is great, which makes all beings live and in which all are placed at the time of dissolution, does this jIva migrate. Knowing that prompter and knowing himself also as different from Him and becoming an object of love of that ParamAtman on account of that awareness, he attains immortality.)

(The two birds - jIvAtmA and ParamAtma- having similar qualities and moving together cling to the same tree. Of these two, one eats the fruit of karma that is ripe and the other shines without eating.)

(The One eternal sentient, bestows the desires of many eternal sentients. That is the cause which is known from the scriptures of the sAnkhya and the yOga schools. By knowing that God alone, one is freed from all bonds.)

This is conveyed by the Gita too:

(Those who, resorting to this knowledge in form of upAsana, attain to the possession of qualities that characterize Me, are not born even at the time of creation nor hurt at the time of dissolution.)

Similarly Maharishi VyAsa has also expressed the idea at great length in the discourse between VasishTa and KarAla and concludes by saying:

“The jIva released from bondage, i.e., the mukta, attains the Supreme Being and acquires attributes similar to those of the Supreme Being. He too becomes free from all imperfections when he reaches Him.”

One more difference between the Lord and the mukta is ‘Sriyapatitvam’, being the Consort of Lakshmee, which belongs to the Lord alone.

The job of creation etc. also can not be distributed to many, as the jIvas are countless and if this job is done every one, there will be only confusion.

So, the Lord alone retains this job with Himself, even though He assigns it others also sometimes as an Emperor gets a job done by His servants keeping the control with Himself.

In view of this, Swami Desikan says in this sub-section, the Lord also derives satisfaction in bringing back at least one jIva into His abode, though still many others are there to be brought back.

In this, He has to be patient as the jIvas are yet to turn towards Him. A situation has to be created to achieve this.

A lot of work has to be done in this regard, as in the case of cleaning every one of the gems which have fallen into dirty muddy mess.

He has a lot of work left to be completed. 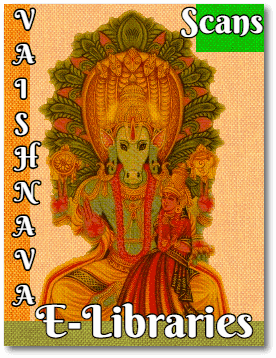 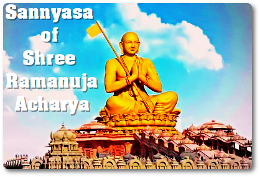